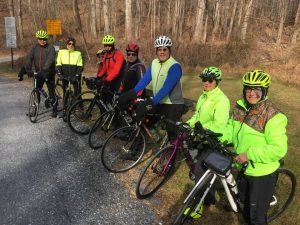 Weather was cool, but sunny, as nine of us headed out for 20 miles. Other than the Walter Martz detour route, traffic wasn’t bad.
We were able to catch up on all the new construction along our familiar roads and the destruction, as well. (That old barn on Mountaindale is finally starting to come down during heavy winds.)  Just before reaching that point on the route we encountered stiff headwinds that kept up all the way back. Those of us who had been overdressed to start were glad to have the extra protection and anyone under dressed felt the cold. Those riding were Vicki Crum, Kathy Dollar, Paul Ericson, Terry Eskuchen, Ray Gable, Arnie Glim, Allan Mitchell, Phil Platt and Bill Smith.