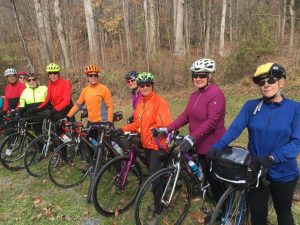 We had great weather for Sunday’s ride. It began with sunny skies, light winds and temperatures moving into the low 50’s. The fall colors were beginning to fade, but there were still a few bright trees here and there. We followed the usual route out, enjoying the new sections of smooth pavement and returned via Sunday’s Lane and Bloomfield Rd to avoid the increased traffic on Opossumtown due to the detour.  By ride’s end the sky had clouded over hinting at the weather change to come later in the week. Riding were Mark Blau, Chris Borkman, Rosie Borkman, Vicki Crum, Kathy Dollar, Terry Eskuchen, Ray Gable, Arnie Glim, Judy Goffi, Patrick McKinney, Allan Mitchell and Diane Sharr.