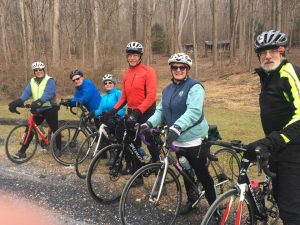 Six of us left Monocacy Middle at 11:30 am today, January 27, 2019:  Bill Smith, Judy Goffi, Ian Hewitt, Lynne Hewitt, Allen Mitchell and myself.  Ray Gable joined us a few miles down the road.  Today’s ride was chilly, but had pockets of warmth when the sun came out.  We never encountered any rain.  On some of the roads we had to be careful because there was still slush, snow and ice on the sides.  The creeks were beautiful with lots of bubbling water and ice along the edges.   We saw several hawks and some vultures in the skies.  In the fields, we saw horses, cows and sheep.   We made our usual stop at the store, took a right on Bethel and wound our way to our picture place on Mountaindale Road.  We continued down on Mountaindale and made a right on Bethel.  Bill dropped something and went back to look for it.  As we waited at Bethel and Putman for him, Lynne and Ian decided to go on.  After Bill arrived we continued on Bethel, heading towards Ford, when Bill for some reason couldn’t see us in his mirror and decided to turn back..  He made a sharp turn around, which turned into a flip.  It was the most graceful flip over I have ever seen.  He did end up with a sore knee, but never hit his shoulder or any other part of his body.  His bike was a little crooked and he was going to take it in to the shop to get it fixed.  We arrived back at the school, with 20 miles finished together.  Ray and I continued on to bike back to our houses.

It was nice to get out of the house and off of the trainer!  Thanks for all who came out!

Staged out of Pleasant Valaley, MD on Sunday, 19 July.

Multiple Distance Rides on Saturday, 20 May staged from the Dogfish Head Brewery in Milton Delaware

Join Lee and Diana on the “Cycle the Erie Canal Bike Tour” from Buffalo to Albany during 12-18 July.   If you are interested in joining up with fellow Pedalers let Lee Rabideau know.