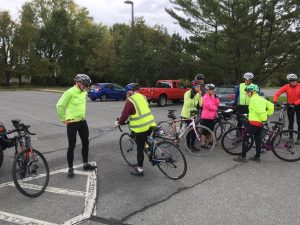 A baker’s dozen started on Sunday, but Bruce left us so we were 12 until
we got to the store where Patrick joined us and we were back to our
baker’s dozen. Temperatures were a little chilly, but Vicki still had
her cycling sandals on, so it’s not winter yet. Heading out we stayed on
O’Possumtown to Ford and returned via Walter Martz so we could check the
progress of the new intersection.  No one got lost going through Clover
Hill although Ray did disappear off the front. With all the trees gone
now, you can see where the road will connect in Clover Ridge. In
addition to those already mentioned, in attendance were Paul, Andrew,
Ray, Jeff, Allen, John, Diana, Lee, Bill, Dottie and Kathy. We missed
you Terry.